The M30 MILLTURN – a machine with a long history 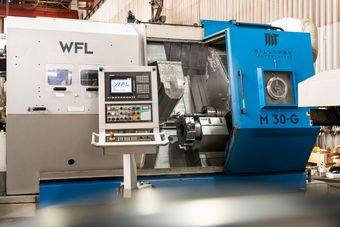 This is what a WFL machine that has been well looked after looks like after 25 years of hard work. 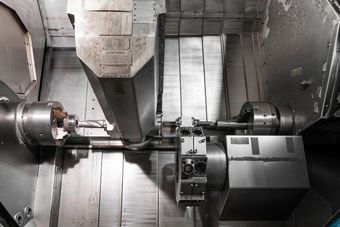 Up to nine machining axes incl. the option of 5-axis interpolation was possible at WFL even 25 years ago. The design with the bottom tool turret and counter spindle allowed for maximum productivity and flexibility. 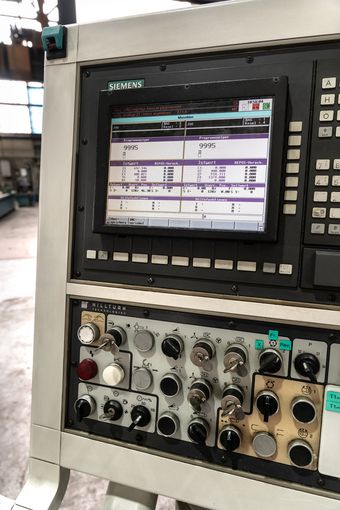 Then, as now, superior control technology and highly innovative software solutions were part of the WFL solution package.

The modern M30 (left) with the legendary ancestor next to it.

The M30 MILLTURN is one of the most popular and successful WFL machines in the extensive MILLTURN range. The classic MILLTURN complete machining centres ushered in a completely new era in its original version more than 25 years ago. After all, this machine was the first WFL MILLTURN with an individual tool carrier for turning, drilling and milling with a B-axis. Many of these old M30 machines are currently still in use. And when taken good care of, the oldest member of the MILLTURN family still delivers top performance even after many years. Ultimately, supreme quality and lasting accuracy are among the virtues of all WFL machines. We therefore decided to take the opportunity to take a closer look at one of these proto-MILLTURNs.

Although the details of the current design have very little in common with its original version, the basic structure with the stable 60° slant bed is still there. Particularly noteworthy features include the powerful headstock with 37 kW main drive and 2-speed gearbox as well as external C-axis. Although the design dates back to the earlier Voest-Alpine WNC slant bed machines, it is still used in the latest MILLTURN models of the M35, M40 and M50 series with modernised drive motors. Water-cooled direct drives are available as alternatives nowadays.

The first machines in the M30 series still had a 24-space magazine with automatic tool changer permanently mounted on the milling unit. Back then, it was a reliable and practical solution. But not long after, this magazine was replaced by an external magazine over the left-hand headstock that was much easier to operate and had an initial capacity of 48 tool stations, which was a lot back then. This made setting up the tools parallel to machining time possible for the first time. The capacity was then expanded to up to 96 tool stations. Modular systems such as HSK50, Capto C4 and KM50 were already available as tool systems. Due to the higher power and stricter stability requirements, the system size had to be increased to HSK63 or Capto C6 for the current models. Even back then, the machine was offered with an optional lower 2x24 disc turret and counter spindle.

The Siemens Sinumerik 880T was initially used as the control system for the first machines. The data memories of this control system were still in EPROM form and were therefore only writeable and erasable with a special device. The newer machines made back then were then delivered with the Sinumerik 840 C. This version already had a hard drive for data storage.

Depending on the configuration, the machine had up to 9 NC machining axes and was even capable of performing 5-axis interpolations. However, due to the lack of corresponding software solutions for the programming, this was a difficult and laborious undertaking back then. Thanks to the B-axis with 7.5 kW milling drive and 4,000 rpm, complex and highly precise oblique machining was possible with high productivity.

At the time, a new feature was the use of a compressor cooling unit to stabilise the temperature of the turning-boring-milling unit. This made it possible to perform lengthy milling operations with a high output. However, the high continuous speeds were the Achilles’ heel of the turning-boring-milling unit, because the permanent grease lubrication was simply not sufficient. It was only with the newer models – which featured oil mist lubrication – that this problem was solved. But, so what, even back then it was possible to use large milling cutters and drills even for heavy roughing cuts, since the milling unit achieved maximum performance even at lower speeds due to the gearbox design. When it came to turning, the machines were unbeatable anyway. The machines were predominantly used in the aerospace industry, in the automotive sector, for hydraulic components, in the demanding field of mechanical engineering as well as in tool manufacture and medical technology. Typical areas of application were complex precision parts made of materials that are difficult to machine.

The successor models still benefit today from the experience gained from the large number of customer requests granted over several decades. The expectations placed on WFL are accordingly high. Ultimately, the machine is the means for exploiting all technological possibilities to the maximum. Then, as now, technological innovations require a solid foundation.

Back
Back to top